TIOMAN is a market leader in the manufacture and installation of road equipment.

With over 20 years of experience, and numerous certificates and awards, we guarantee a high standard of order fulfillment.

This fact is confirmed by the great satisfaction of our current clients. We offer the highest quality metal structures, active signs and road electronics, large-surface signs and boards, Traffic Management Systems, and other safety products. 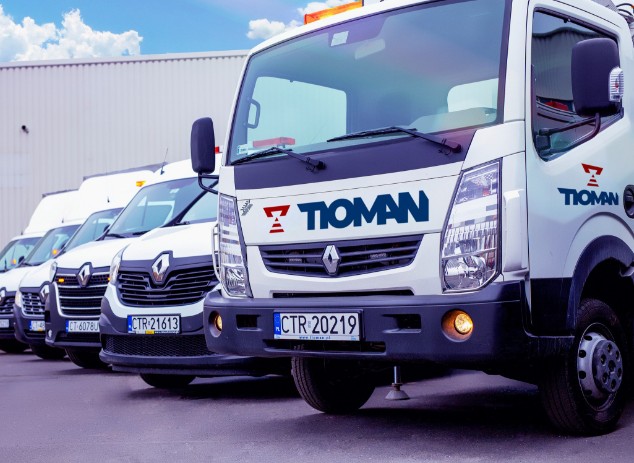 Our head office is located in the Pomeranian Special Economic Zone, in the central part of Poland, which is a favorable logistic location. We have a large production area concentrated in a modern hall and qualified staff implementing innovative solutions for the roads.

For years we have been cooperating with the road authorities at all levels, as well as national and foreign road companies. We export to over 20 countries worldwide. By combining experience and state-of-the-art technologies, we are constantly improving and extending our product range. Through our activity we contribute to saving lives and improving safety on the roads. We invite you to cooperate with us.

km of roads equipped by TIOMAN

the span of the widest manufactured gantry

TIOMAN started in 1998 as a company processing and trading road signs and small road safety devices.
The enormous pace of development caused TIOMAN to change its base several times over the years. Starting from the beginning of our own production in 2001, through moving to a production hall in Kaszczorek in 2006, moving to a production hall in Toruń in 2008, and finally moving to the Pomeranian Special Economic Zone in Ostaszewo near Toruń at the turn of 2013 and 2014.

In 2007 we started our export activity. Starting from the Baltic countries we have developed sales to other European countries. Since 2012 we have regularly appeared at Intertraffic Amsterdam as an exhibitor. In 2015 we won our first export contracts to Arab countries.
A big driver of the company’s development was the EURO2012 championship, before which we executed many road contracts, including participation in the construction of the Radymno-Jarosław section of the A4 motorway. Since 2013 we have been cooperating with University of Technology and Life Sciences in Bydgoszcz (Politechnika Bydgoska), and since 2014 with Transpolis laboratory from Lyon (France). Thanks to our engineers and this cooperation, we have developed our own safe T-SAFE structures, for which we obtained the EN 12767 certificate in 2020 after passing crash tests.

We invite
to cooperate with us

Contact Us
We use cookies on our website to give you the most relevant experience by remembering your preferences on repeat visits. By clicking "Accept", you consent to the use of ALL cookies.
Read more Accept
Manage consent

This website uses cookies to improve your experience while you navigate through the website. Out of these, the cookies that are categorized as necessary are stored on your browser as they are essential for the working of basic functionalities of the website. We also use third-party cookies that help us analyze and understand how you use this website. These cookies will be stored in your browser only with your consent. You also have the option to opt-out of these cookies. But opting out of some of these cookies may affect your browsing experience.
SAVE & ACCEPT